The first Citroën passenger cars were imported to Finland in 1921 by the company named "Ab Auto-Tractor Oy". They saw that half-track cars could be a solution for the hard Finnish winter conditions because the cars of the 1920s were helpless in the thick snow and there was no winter maintenance on the roads. The car with half-tracks went through thick snow and it has pulling capacities too. When driving in the snow, there were skis under the front tires. In addition, the first Citroën half-track cars were convertible to ordinary cars by replacing standard wheels with the rear axle.

In Finland these half-track cars were called "Citroën winter cars" or "snow cars". The newspaper adverts also featured the nickname "The Sahara Desert Train", which referred to explorations by these cars. The first newspaper ads of half tracks can be found from late 1923. It says that test drives were held at least in Helsinki and Tampere cities.

According to preserved information and photographs, the Finnish army also had some Citroën half-track vehicles. The first of these was ordered already in 1922. The car carried out a 40 km test drive in Southern-Finland with a crew of four. This made the car go well. The military flight crews also carried out similar winter tests, with 20 men being pulled up in a sleigh. In 1924, military car crews began winter plow road-testing, including a Citroën half-track. However, breaking the frozen track of horses caused difficulties.

The last surviving images of Citroën half-track vehicles in military use date back to the early 1930s, when a newer model with steel tracks was in service. For civil purposes, Ciroën semi-track vehicles were reportedly in use during the severe winter of 1930/31. At that time, the bus traffic was off there for four months because of heavy snow.

The expeditions provided by the André Citroën were followed with great interest in Finland as well. A Central Asian expedition adventuring in the Tibetan mountains was thrilled by the main Finnish magazine in a two-part "Roof of the world" story in 1931/32. Inspired by this, the Citroën dealers in Finland organized their own 350 km expedition in December 1931 with the type P15N. The route traveled from the Arctic Ocean to Kiruna. A few photos from this trip have been preserved. These cars are identified by the text "Citroën teittömillä tuntureilla" (Citroën in a roadless mountains).

The surviving cars in Finland

To our knowledge, no semi-roller car or even a wrecks has survived in Finland. But more information and photos can be found from the book "Citroën Suomessa", published by Alfamer 2019. All information, photos and tips about these cars in Finland are received with great interest!

Citroën in Finland: a book of Antti Pitkänen and Mikko Salonen. 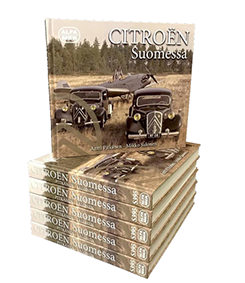 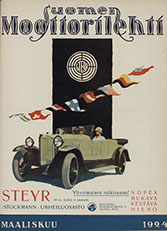 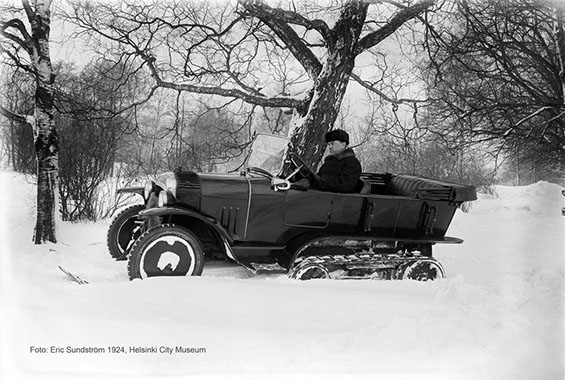 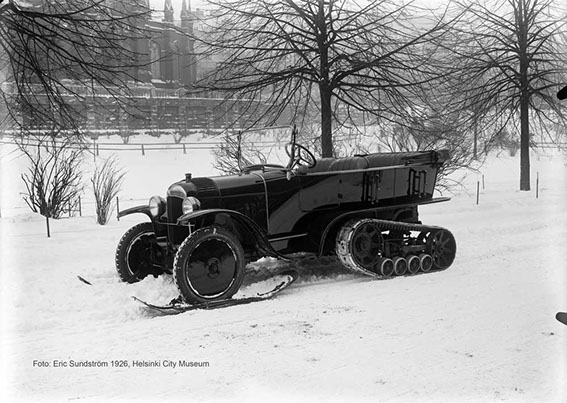 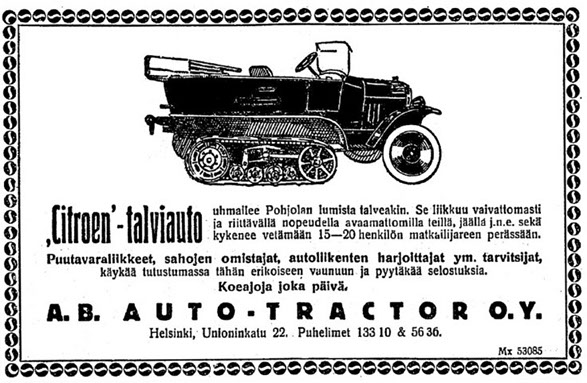 Finnish lieutenant Raaitkainen wrote this to the danish collegue the 2.nd february 1924 about the ammount Citroën-Kégresse in Finland